Help us to support students by making a donation today:

Goal 1: End poverty in all its forms everywhere

The SDGs are a bold commitment to end poverty in all forms and dimensions by 2030. This involves targeting the most vulnerable, increasing access to basic resources and services, and supporting communities affected by conflict and climate-related disasters.

1.1 By 2030, eradicate extreme poverty for all people everywhere, currently measured as people living on less than $1.25 a day

1.2 By 2030, reduce at least by half the proportion of men, women and children of all ages living in poverty in all its dimensions according to national definitions

Goal 10 : Reduce inequality within and among countries

These widening disparities require the adoption of sound policies to empower the bottom percentile of income earners, and promote economic inclusion of all regardless of sex, race or ethnicity.

10.1. By 2030, progressively achieve and sustain income growth of the bottom 40 per cent of the population at a rate higher than the national average

10.2. By 2030, empower and promote the social, economic and political inclusion of all, irrespective of age, sex, disability, race, ethnicity, origin, religion or economic or other status

Visit us at the 36th Festival of migrations, cultures and citizenship 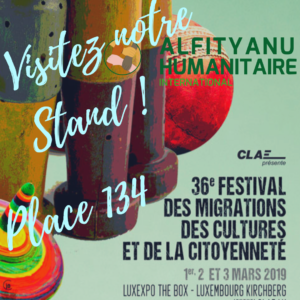 support our program to end all forms of hunger and malnutritionn !

we support small scale farmers and give equal access to land, technology and markets in order to improve agricultural productivity.

visit our article and make a donation here